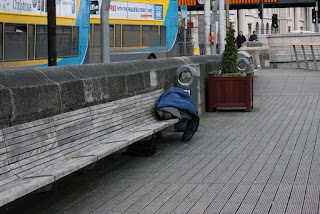 I woke up suddenly from a dream in which 3 or 4 "street people" I am friends with were sitting in my house visiting and having coffee. This house was in the downtown area, and looking out the kitchen window, we could see other street people milling around down on the street.

As my friends got up and were leaving, lots of other street people came rushing in. But instead of going upstairs to the kitchen/living room area, they rushed in the bedroom area on the main floor where our family sleeps. I was nervous because these people sat down on our beds and easy chairs, and some of them had wet themselves and/or were dirty, and I was worried about some of them taking away personal items because I didn't know them.

I had to run upstairs to get coffee and food from the kitchen and then bring it downstairs to serve them. And some of them didn't seem to think I was hurrying fast enough. One lady I didn't know came and asked me for uncooked rice to take with her, and I told her I only had what I'd already cooked for my family for supper. She kept pushing me, being really insistent and demanding, and as I woke up, I was thinking, "Oh, I need to signal a couple of the people here who I know to come and rescue me from her," because I used to do that when I was with the God's Kitchen street ministry, and it always helped.

Then I woke from my dream and my stomach was churning and my head hurting, and the details stayed so strong and clear. I tried to distract myself by checking Facebook and even wrote a blog article on a totally different topic.  But I still couldn't shake the dream or settle my tummy. So I decided to write in my journal as that usually helps me unwind a bit. It did help me stop shaking but I still was feeling flustered.

I guess my concern for street people and others in various difficulties is deep within. And I still feel badly for stepping out on the God's Kitchen street ministry when my health was very poor for a time. In fact, I had to step out of all my activities other than family and work at that time, so I shouldn't feel guilty, should I?  I really was overwhelmed. But that was some time ago, and I've restarted a variety of activities, but not the street ministry which, when I think of it, exhausts me just to consider it. And to think that for a long time, I found it so energizing and joyful. What happened?

Sometimes I also feel guilty because I get annoyed about people who are pushy and demanding and feel entitled--but don't make any effort to change things or do things for themselves (or so it seems to me). I believe that we, as Christians, are to help the poor, but I feel conflicted about the poor who seem to actually enjoy their lifestyle, including drugs, alcohol, panhandling, and so on, and are really demanding to be served and taken care of.

There was a time when I wanted to be able to invite street people into our home for coffee. And I did, sometimes, at least the ones who were relatively safe, in my judgment. But my husband and children were really opposed--and probably for good reason.

My mom, when I was growing up, invited all kinds of "strange" people into our home for meals and events like Christmas, and fed them and gave them clothes, but they were people who were at least clean and had some kind of roof over their heads (ie. they were not living rough, though they were often very poor), and those who weren't overly disabled made some effort to be self-sufficient. They were always really grateful and I only ever remember one man (and his adult children) who was demanding and seemed to feel entitled. They also were not "drunks," and I don't think we actually knew any "druggies," although some of my friends my age were using marijuana and speed and such, but I don't think my parents had any idea about that.

So our family was helpful and kind to "odd" people, but I think those with addictions or really "non-Christian" lifestyles were just so outside our church/social circle. There weren't a lot of "drunks" in our small town, or at least they weren't really apparent to us. I don't even think it was a "religious" separation. We just lived very different lives, and even lived in different areas (the old saying, "living on the wrong side of the tracks," was a reality at that time). I know, looking back, that I was really ignorant and naive about students at school who came from "rough" backgrounds. I knew they were there, but they were in different classes/streams, and they tended to drop out as soon as they could.

Students from "those families" seemed to live a separate existence from the rest of us, and we didn't do anything about it because we really didn't recognize it--and I suppose our parents and other adults in our church/social circle were doing their best to protect us from evil influences? My parents were not "racist" or "upper class" or anything. And they certainly didn't intend to be prejudiced. In fact, most people thought my parents were a bit odd because they invited in all those "weird" people, and had friends of all different races and economic levels.

So I wasn't really even aware of people living rough, or on the skids, or addicted when I was growing up. When we'd go to the big city of Vancouver, we'd go downtown shopping at Woodwards, in the area now known as the Downtown East Side (DTES), and we might see the odd person passed out on the sidewalk or hanging around drunk at the doors of bars, but we felt safe, pretty much, and really didn't have any real connection. I suspect there may have been a lot of alcohol abuse back in the day, even in "church" families, but people kept it hidden in the closet.

Things are so different now. So many more people on the street, so much more obvious. So many people with drug and alcohol addictions, and it seems like nearly every family experiences to some degree the fallout of addictions from someone in their family or close friends. It seems like everything is out of the closet now, and though that really is a good thing in some ways, it perhaps means that with that knowledge, we have an increased responsibility to do something about it.  But still, with all that staring us in the face, it is so easy for so many people to live separate lives and fear and look down on "those people."

I'm grateful for those years I spent with God's Kitchen. I'm seeking God's direction on whether to return and help out again there. I got to know so many street people as dear friends.

But then I have dreams like the one I just described and I realize that I still struggle with the ones who (it seems to me...) are demanding, greedy, entitled, pushy ... and yes, lazy...

Grant me Your wisdom and love, dear God. Please.

Posted by Norma Hill - aka penandpapermama at 09:29