Talking to Father about Heaven (and Hell) 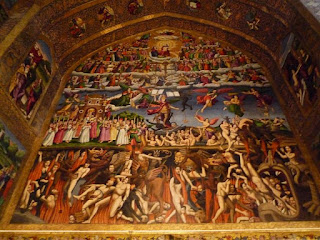 I was just singing "What a day that will be when my Jesus I shall see, When I look upon His face, The One who saved me by His grace..." and I think I may have figured something out ... about why I'm so ambivalent about the whole idea of "heaven."

While I DO WANT TO BE WITH JESUS, I've found myself avoiding (sometimes almost "doubting") about heaven; yet it hasn't really seemed like doubting. As I was singing this hymn, it suddenly occurred to me that one reason I avoid thinking about heaven and even avoid singing songs like that, is maybe that's where people like my mom and dad and other loved ones are. And if I don't think about heaven, then I don't have to think too much about, and miss, and feel lonely for those who've gone on before.

And (getting to the core of this), not have to deal with my regrets, and with my guilt for not having been loving enough, and having been somewhat regretful about caretaking.

And by avoiding thinking about heaven, I can avoid remembering people when they were "falling apart" like my mom with her dementia and my dad when he was so disappointed to find out he had terminal cancer and would die at 82 instead of 90 like he, for some reason, had planned. And, yes, I can avoid thinking about myself growing old and possibly falling apart one of these days, too.

To be honest (just facing this, right now), it's also easier for me to think of people as "just gone" than to think of them still alive somewhere. And it really bothers me to think of them "looking down" at me--with all my failures. So many people seem to take comfort in that idea of their loved ones looking down and continuing to take care of them or whatever. At least that seems to be a really common Facebook theme! Though I tend to think it is unlikely they'd be doing that, because I can't find any Biblical reference to such a thing, to begin with; besides, if it's true that "there is no sorrow there, no more burdens to bear, no more sickness, no pain, no more crying over there" as the song lyrics say and scripture seems to back up, they couldn't be seeing our miserable world, could they? Could they?

I guess the other reason I have trouble thinking about heaven is that it then brings up the whole question of hell. It seems like most people I know don't even believe in hell anymore--though the ones that do, seem to hold with rather extreme "hellfire and brimstone" scenarios. I mean, maybe it's good not to "scare people into getting saved" by holding terrifying descriptions of hell over their heads, but it just seems that people have either decided that "God loves everyone and He's taking them all to heaven eventually," or, if people are really, really bad, maybe they'll go to hell, but it will only be those "very worst" people. (But I wonder, where then does one draw that line?)

I guess some people just believe that this life is "all there is"--but the thing is, most people I know (including people of many different religions, or at least beliefs or spirituality or whatever) do believe in some kind of positive after-experience, even if it's something like being absorbed back into the great spirit, or into Mother Nature, Gaia, the universe, or even nirvana, nothingness.

It's a negative eternal alternative they don't want to believe in. Even many of those who most strongly claim that this life is all there is, suddenly seem to waver when they lose someone close to them or are forced to face their own mortality when cancer or whatever strikes (though in the latter case, they may try even harder to act tough about their "this is all there is" belief and stick to their theory as desperately as possible.

But: is there a hell ... whether it's a fire and brimstone place, or a waiting for judgment day place, or even "death and separation from God forever" (which IS scary and we seem to want to avoid that, too, even if we claim to be secular and just another kind of animal)?

I was brought up to believe in a very real, vivid, forever hell as a place of great suffering, surrounded by demons and very evil people. And yes, it is very hard to deny, or even soften up in some way, what you've been taught from birth.

But I DO struggle with the thought of people--most people, in fact--who:


I DO struggle with the thought of people like this getting thrown into that eternal suffering and punishment I was taught about. And it seems that as long as I feel unresolved about that, how can I feel joyful and anticipatory about heaven?

On the other hand, if people have this happy-clappy idea that everyone (or almost everyone) goes to heaven or some other happy place, then will they personally feel any need to really follow Jesus?

Though, in my experience at least, I wouldn't want to live THIS life without Jesus--never mind eternity without Him. So maybe that's another reason I don't think so much about heaven: because the Kingdom of God IS here, now, something to be enjoyed, lived in and with already, with Jesus, Father, Spirit every day. Yes! In that sense, heaven isn't just the goal, the reward, something to hope for a look forward to; it's a present, living reality, too, even as we are surrounded by all that is not heavenly.

"Hell on earth": what about that?

Please help me, dear God, to know the truth. Please. Thank You.