Do you ever have a "crisis of faith"?

Today I was reading Matthew 7:13-23 and ended up with tears rolling down my cheeks.   I think that some doubts and wonderings that I've had over the years, but buried, because 1. they scared me, and 2. I was confused about conflicting doctrinal points I've encountered, and 3... well, mostly, yes, I was scared! ... anyway, they just all suddenly burst out!

It's an interesting chapter.  Verses 7 to 11 are so encouraging.  Father giving good gifts to His children and all.  And then verses 13-23... well, here's how they "hit me" (as I wrote in my journal):

Am I the only one who finds this passage really disturbing?  Sometimes it really worries me about ME.

First, if some Calvinists I've encountered are right, and only some are "chosen" (and others have no chance), then what if someone really WANTS to believe in and follow Jesus... and even really believes they are... but what if that person isn't among the "chosen" ones (and who can know that for sure?)... what if all that's person's longing and trusting is for naught?

Second, if some Arminians I've encountered are right, the ones that are so big on "backsliding" ... well, what if a person has maybe been misled by false prophets, and doesn't even know they have been misled?  What if they really love the Lord, and are following Him with all their might (at least they believe they are), and then they get to the judgment and find out that it was all "Lord, Lord" and they got off the track along the way?

Third, what if someone - okay, what if I! - look at myself right here, right now, and don't see evidence of "fruits" in my life?  What if, for example, I can't list off a bunch of people who I know I personally led to the Lord (seeing as that seems to be the number one "fruit" in a lot of folks' opinion).  Or if I'm not all involved (like I used to be) in a whole bunch of church activities and programs (another big time fruit, in some peoples' opinion).  Or what if I'm not "bold" at telling people the gospel?  Or I don't seem to be reaching out to my neighbors, even the ones right in my neighborhood/complex, even though I try and try (and then kind of give up because nothing happens)?  Or if I feel rejected by past "church friends" but then realize I haven't been trying very hard to reach out to them myself?  Or what if the depression I've recently gone through is really a sign of lack of faith, like some folks say?

Well, by the time I got to writing the last few lines, I really did have tears rolling down my cheeks.  Feeling so discouraged.  Feeling hopeless.  Even feeling like surely I have let God down! (Yes, I know, that isn't theologically sound...)

And suddenly, hubby (who did not see my tears), called to me to ask me to go to the store and get something for him.  Like I wanted to go to the store with tears rolling down my cheeks.  But it was kind of an emergency, so I went.  I got what he needed, and as I was on the way to the till, I passed a display of my absolute favorite kind of chocolate bar (which is usually hard to find around here, and is more expensive than most) on special: 3 bars for 99 cents!

And the weirdest thing happened.  Father was smiling.  I wouldn't say I "saw" Him or anything.  But I knew He was smiling.  And He kind of chuckled and said, "Remember, your Heavenly Father gives good gifts to His children!"  (Okay, so I didn't "hear" that out loud or anything ... but I heard it nevertheless.)  And so I picked up 3 bars!

I took the other stuff home to hubby, and then grabbed the camera, because today was the most totally amazing beautiful sunny winter day ever, and I went to the beach, and clicked and clicked (and nibbled on one of the bars, of course).  Heavenly sunshine!  Beautiful creation!  Mouthwatering chocolate (what? you don't think Father's gifts include chocolate?)!?! 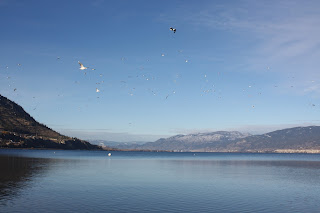 Even the seagulls were wheeling with joy!  And Father is smiling!  Yes!

(And then I went to the library and got some books about a project He's been gently pushing my way... and I've been hesitating because of all my wonderings and discouragement and stuff.  Onward!  Thank You, Lord!)
Posted by Norma Hill - aka penandpapermama at 16:47

Your picture is beautiful!

I had some thoughts regarding your post. I am glad that the Father showed you His love, and I do believe He can give gifts of chocolate!

Regarding Calvinism, I am sure a calvinist would say that one who wasn't chosen wouldn't ever want to be chosen, so there is no danger.

Regarding Arminians, I believe that if our heart's desire is to do the will of the Father He is too faithful to allow us to continue on the wrong path. Even if we stray, like a good shepherd He will correct gently and get us back on the right path.

Regarding fruit, I don't hold to how the groups you mentioned might define fruit. I have read enough of your blog to know that you have more fruit in your life than most Christians who do lots of stuff 'in church'. Galatians 5:22-23 is clear: "But the fruit of the Spirit is love, joy, peace, patience, kindness, goodness, faithfulness, gentleness, self-control". I also consider righteous acts to be fruit, and your involvement with the "street people" is an example of giving of yourself to others.

In my opinion, the church places way too much emphasis on our verbal proclamation of the gospel to unbelievers, and virtually no emphasis on the visual proclamation. In reality, until the world sees us BEING the body of Christ, they won't really want to hear much about Christ. In many cases, anyway.

Regarding depression, I don't think it implies a lack of faith. In looking back on my own life, I find myself getting depressed when I am trying too hard in my own strength in a given area, and not trusting Him. I guess one could say it represents a lack of faith, but the term "lack of faith" is loaded with a lot of negative connotations that shouldn't exist. I think we all face areas of our life where we don't trust Him as we could/should. That is what our walk with Him is about though, continually growing in our knowledge of Him, growing in our faith, etc. It is about the journey!

Thank you so much for your thoughts, Mark. They are greatly encouraging.

Truly, it is about the journey. I am finding that more and more, in some very amazing ways, these days.