Am I a Liar? Maybe More Than I Realize? 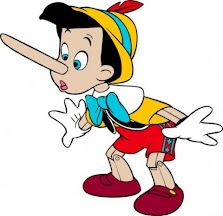 Do you tell lies? More to the point, do I tell lies? A good question, maybe, for the beginning of a new year when we're encouraged to resolve to improve ourselves, eh? It's a question I've been pondering a lot over the past year, seeing as there seems to have been an ever-increasing amount of fake news, alternative facts, and other truth-stretchers-and-twisters whirling around us moment by moment, and which for a good many people seem to be totally acceptable—even approved. Of course, it's easy to judge others for their twisting of truth, but what about our own "little white lies" (are those really a thing? Another good question for another post, perhaps).

From the time I could string two or three words together, the adults in my life took pains to impress upon me that telling lies is a terrible sin. Adam and Eve picked it up immediately from the "father of all lies" himself, you know. And being caught in a lie (however "little" and "white" it might have been) was a sure path to getting my mouth washed out with soap. This was an effective punishment for me, as I hated the taste, but my brother quite enjoyed it—he enjoyed eating crayons too, as I recall—and thought it much superior to a spanking; I remember how, when he was in trouble, he'd beg for the soap-in-the-mouth-treatment, which I could never understand. But I digress. Anyway, depending on the size of the lie, especially if it led to another and another, which is one of those things that lies tend to do, mouth-soaping could lead to other harsher punishments, so you'd think I would have caught on and swallowed any falsehoods before they could pop out....

The trouble was, telling a lie successfully (e.g. not getting caught) was such great for avoiding punishment for the many other misdeeds we committed, whether intentionally or unintentionally. And oh, my goodness, there were so many possible sins (rules and regulations) which could snare a little person who might not even realize they had done something wrong, or couldn't understand what was wrong with the behaviour or attitude in question. Even a "tone of voice" or a "sassy" phrasing of a statement could invoke judgment by those who loved me dearly and were terribly concerned for the state of my soul—or who simply decided I had crossed a line they'd drawn. Sometimes, of course, I was a line-crosser on purpose, but quite often I found the said line to be very puzzling indeed.

Certainly, there were things I did that I knew and understood were unacceptable: clearly stated rules like the Ten Commandments which we memorized early on (at least superficially; I wasn't always clear about, for example, about how being angry at someone could be equated to killing, though we were often warned about slippery slopes; and I had no idea for quite some years about what adultery might be and how it related to me as a young child). Other rules ("Thou shalt sit quietly and not wiggle during long sermons in church" — my poor wiggly little brother got spanked quite often for breaking that one, and I once got spanked as well, since Mom felt it was a bit unfair for him to get more spankings and she told me it wouldn't hurt me to join in receiving the spanking so he wouldn't feel so picked upon. That's one of those occasions in my young childhood that inexplicably has stuck with me these 60ish years later!). I suspect Mom did not enjoy spanking us, but it was a well-accepted and even expected way to keep children on the straight-and-narrow, and perhaps she felt under pressure to do so in order to be a good parent. At any rate, she once told me, many years later, that she suspected I often got away with things I hid much better than my poor brother, who found it much more difficult to appear as angelic as I did. And, yes, that brings us back to telling lies.

So telling lies successfully was appealing, as it avoided punishment for other crimes committed. While I was generally a "goody-two-shoes" little gal, usually obedient and respectful, I was also in fear of breaking the many rules set before me by definitely caring parents, grandparents, church, elderly folks who felt a direct responsibility for my soul; school teachers and the dreaded principal; ministers and Sunday School teachers; moralistic stories in Sunday School papers and Christian children's books; sermons at church and Bible camps and church children's groups and evangelistic services and prayer meetings, and so on. Naturally, there was also the Bible, which I had been thoroughly schooled in from birth, and read through it completely myself for the first of many times at nine years of age; one of the things that puzzled me about that was that it did not include many of the rules and regulations I'd been taught so thoroughly.

Therefore, the usefulness of "the lie." The thought of spankings at home terrified me, though they were few and not terribly painful; and I was also quite terrified of getting in trouble at school. Detentions were shameful, and while I mostly kept out of trouble (I remember once having to clean the entire classroom floor by crawling up and down the aisles pushing my ruler in front of me), I saw enough punishment of other students (being sent to the principal for "the strap" being most frightful, but also ear-pulling, knuckle whacks with a ruler, shoes and chalk brushes thrown at students, "writing lines" and so on—my, how things have changed since then...) to encourage me to avoid incurring the wrath of my teachers.

It didn't take long to discover that there were various ways to lie that didn't require an outright, in-your-face lie (which I was never very good at; my guilty facial expression tended to give me away when I tried that; though oddly enough, as an adult, I was equally poor at "reading" the expression of my children's and student's faces... ). There were tactics like "mostly telling the truth" but conveniently leaving out a few minor, troublesome details; transferring the blame to someone else; looking very sad and pitiful; hiding out somewhere until the potential punisher was distracted or forgot; pleading that I didn't realize I had done something wrong; telling a long, convoluted story that would distract from the point of the actual offence; get busy doing something that would win the favour of the potential punisher; and so on.

Eventually, I grew up and far fewer adults felt the need to be responsible for keeping me on the straight-and-narrow. But the "little white lie" habit had, unfortunately, been well engrained. Because not only did telling lies help to avoid punishment; it also turned out to be an excellent way to keep people approving of me. Being approved of was, of course, closely related to all those rules and regulations. This has been one of the greatest difficulties in my life: the desire to have others approve of and accept me. And telling "little white lies" works so well. Often, I don't even think them through; they just slip out and there they are. The older I get, the more I realize what I am doing, and while I really try to overcome this, it is very difficult. Sometimes I wonder if I will ever conquer it. I know, of course, that this is one of those things that "only the Spirit of the Lord can change in your heart as you give it over to Him" and that "you just have to love Him and want His approval more than the approval of people." All very well, but when His approval was so wrapped up in the approval of the significant adults in my life from the earliest age, giving up the approval of others is much easier said than done. Still, the fact that I've come to recognize this problem in my life and want to change it gives me some consolation that maybe I am discovering the real "straight and narrow way" rather than the "rules and regulations" way.

One more thing related to all this. As you might gather from my ramblings, I love to write—and to tell stories. Entertaining ones. Especially stories from my childhood (and adult life, too). A perceptive uncle told me that perhaps my stories are more "creative" than "memoir" — though he also added that this is a family trait. So I'm wondering if the "creative" aspects of my memories are also related to the whole "approval" thing? Embroidering past events to make them more entertaining--and thus more approved, as my audiences laugh heartily. But that's another post for another time.

Posted by Norma Hill - aka penandpapermama at 14:48