We need Your Hope 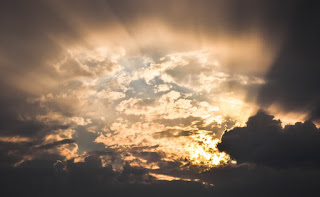 Sometimes I feel so depressed. The world seems to get worse day by day, minute by minute. What is the matter with people? Why don't they think? Why don't they care about anything beyond their own happiness in the moment? Where is community? Where are lofty goals and ideals? Where is love--for God and for humanity?

And what is the point, I wonder, of all the stuff I've been studying? I want to help people succeed in their education, and in their writing and publishing. But what is "success"? I don't want to be one of those teachers who is just adding to the "self-affirmation" illness of our society. And illness it surely is; rot from deep inside; and encouraged by those in power who see the truth: that "entertaining the mob" is the way to keep them happy and in control--and empty, vacuous, stupid. Like the Roman mob in the Gladiator film, the fall of the Roman empire, and modern nations and global empires. Trouble is, too, that "dark ages" and chaos come after such falls; and sadly, the rediscovery, the renaissance that then follows seems only to lead to another round of the cycle.

I'm tired. My brain hurts. What, I wonder, will be the positive effect of any of my efforts, of my thinking, my encouragement of others, and my own enthusiasm for learning, exploring, wondering, challenging?

Is there any point, Lord? Are we doomed to endless cycles of hope--and failure? How long does this need to go on? Your mercy and grace is amazing ... but sometimes I wonder if allowing this world to carry on and on is really merciful? I know You see the big picture and I don't. I know scripture warns of things getting worse and worse. I know that the end will come when we're not expecting it, not looking for it.

Yes, we need Your Hope. There IS light at the end of the tunnel! :-)
Posted by Norma Hill - aka penandpapermama at 09:12