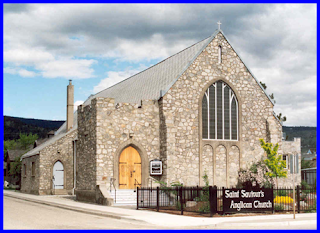 Woke up early this morning. I summoned up my courage--and went to the 8 am traditional "Common Prayer/Communion" service at St. Savior's Anglican Church. There were maybe 20 or so seniors, me, and one guy maybe in his thirties or forties.

They used the traditional book of Common Prayer, plus a hymn book, plus a bulletin with today's scripture readings and collect. I recognized many of the prayers, the Nicene Creed, the responses, and the Communion order of service, and was even able to repeat some parts quite accurately, even though it has been a long time since I attended Anglican services.

But when it came time for communion, tears were trickling down my cheeks, though I didn't go up for communion. It was like a great dam in my heart was springing a leak. The tears were coming down before I even "felt" anything . . . except that in some very deep and profound way, I was "home."

I wonder . . . I remember loving the Anglican service in Keremeos ... and Old Massett . . . and Masset . . . and and in those places too, I felt at home. I wonder if it might have some relationship to my earliest memories when my parents went to the Anglican Church in Masset (and sometimes Old Massett) when I was very small. I remember Mom said they often had to get a baby-sitter because young children were frowned upon in the Masset church (too noisy). But still, I must have been there sometimes. Maybe it's "home" like the town of Masset was "home" when I went back as an adult after being gone for 22 years. Maybe those early years really do have a really profound imprint.

Yet I have, at the same time (and always have had) this slightly "guilty" feeling -- judged feeling -- for going to a "liberal" church, where, supposedly, it's all "social gospel" and "ritual" and way too much "liturgy" and "tradition."  That, too, was implanted in me from my earliest years, as letters between my parents and grandparents in those times show. It was such a big deal then, the differences between denominations. So sad . . .

Yet, in actually attending Anglican services over the years (at first because it was the only choice in a small town, but soon enough because I found I loved it), I have found only "home" and "family" and yes, tradition, deep roots that stretch through time and history and around the globe--a true sense of "the church universal" . . . and a lack of judgment . . .

I told my husband that I felt this morning that the people (and the service, and the atmosphere) were, well, gentle. I felt like a little child wrapped in a soft blanket and held close in my mother's or father's or grandfather's arms/lap.

Why did I not take communion? Scared. Afraid of getting drawn in, perhaps (I'd truly rather go there than to "evangelical churches" or even to the small house church Sunday gathering I've been attending. Though I wouldn't mind both the Sunday gathering and the Anglican service. I think I'd really feel like I'd been both fed, and had Sabbath rest! I don't expect they'd mind, either.

I also felt . . . yes, the load of my sin (we avoid that in "evangelicalism." We talk about the glory of the cross, about its victory, about its forgiveness, but when we don't  really speak what we have been rescued from, then where is the glory, I wonder?)

And I felt the sense of awe and wonder . . . of the majesty of God, I suppose . . . and the fullness of God. I feel like so many Christians ("evangelicals," the ones who feel so smugly superior to the "liberal social gospel types," who, yes, feel the "liberals" really aren't Christians at all), well I feel like their God, all loving and personal and Fatherly and "intimate" . . . that their view of Him is really awfully shallow. I miss the "deep, slow moving river" I find in the Anglican liturgy; even if it is not nearly as "exciting" as the "springs of living water" that some churches constantly celebrate.

Posted by Norma Hill - aka penandpapermama at 09:50